Welcome to my blog! You will find that the majority of my posts these days are in regards to lesbian, gay, bisexual and transgender (lgbt) rights, but not exclusively. Hopefully you will find it informative and/or entertaining.

A few pointers for those of you not familiar with the Live Journal format:

There are "tags" on the right and on corresponding articles. You can click on them to filter only "lgbt," for anything related to the lesbian, gay, bisexual, and transgender population, for example. Click on a title to get the direct link address. Click on "Her Voice was Clear and Musical..." to return to this page.

If you have a LJ account and decide to friend me, please PM me and let me know who you are and if you want me to friend you back.

New info: Many entries are public, but I will only allow friends to comment. LJ is getting too many phantom users that post spam in my Journal. Sorry that a few assholes have to spoil it for everyone else.

Chris has posted on Facebook that Melissa has passed away.

Mel was the type of person who made everyone feel welcome, as she did for me at my first Dragon*Con in 2004.

She handled her fight with ALS with grace and, most importantly, humor.

In honor and memory of her, I am reposting one of her LJ entries from 2008, which says so much about who she was.

"I come before you being a humble, sometimes obedient, mostly okay follower. I would like to lodge a complaint against what I feel is a grievous misjustice being done to my person. I'm sure you know that my hands are already quite full being a mother to my six year-old son, so it should come as no surprise that I feel you are being unfair burdening me with this affliction.

"Yes, you know what I mean. I'm talking about my zits.

"Oh Lord, have I not already walked through the valley of Clearasil and purged myself with the Oxy-10 Commandments? I have baptized my face in the water more times than John dunked your faithful in the river Jordan. I find myself thinking that if you could empower Moses to part the Red Sea, then my complexion should be but a trivial matter.

"In return, I promise to buy more Girl Scout cookies (provided that they are made with real Girl Scouts), be nicer to my mom's cat, and stop intentionally tripping people with my cane. 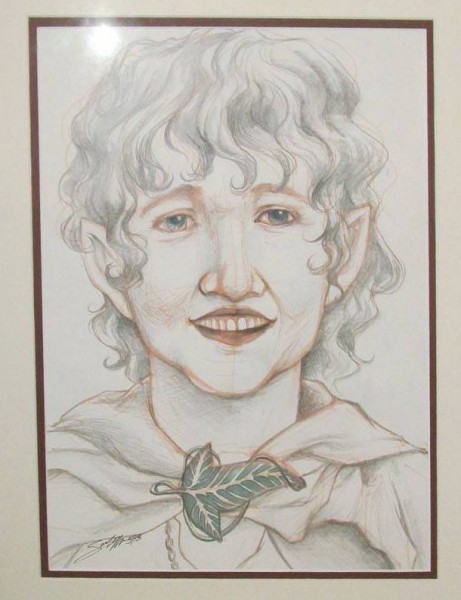 It seems every year I vow to post more regularly here, and every year it goes to pot within a few months.

But I am trying again.

A brief recap of the last few months:

September was AL3P, something I’d been looking forward to all year.

It was everything I had expected. Friends old and new. Perfect weather. Fun times geeking out over Tolkien. What could be better? 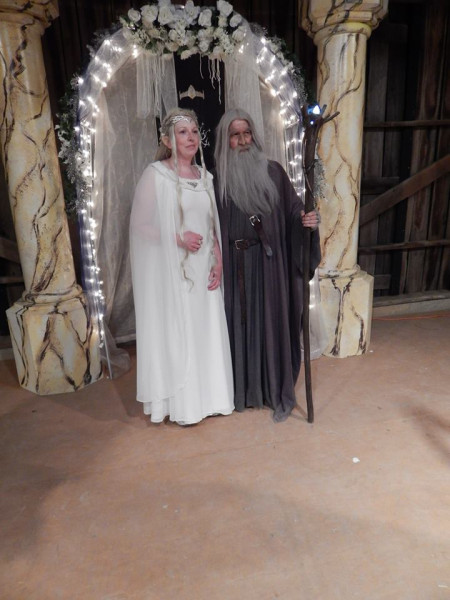 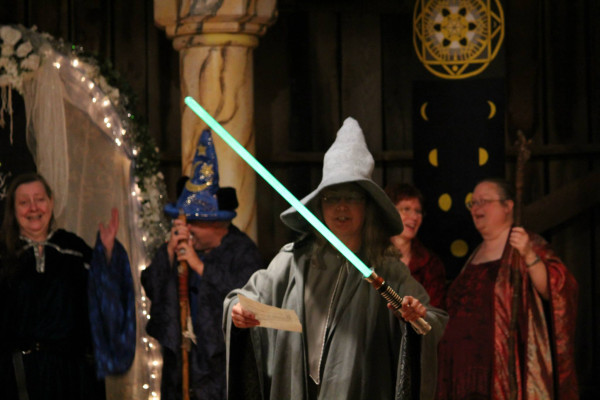 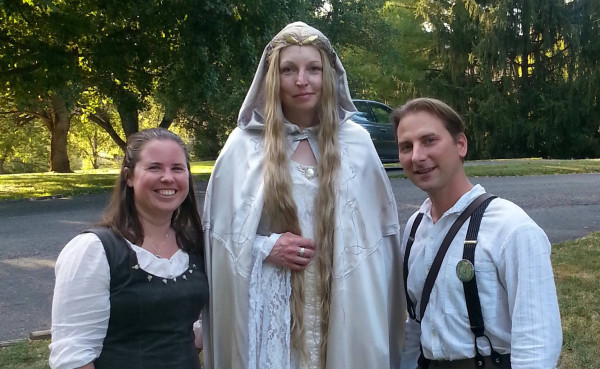 October, I managed to cosplay four times, which is pretty good for around here.

In the midst of the holiday season, two wonderful things happened.

First, my brother, Don, married his partner, Randy. I flew out to Vegas to be there. 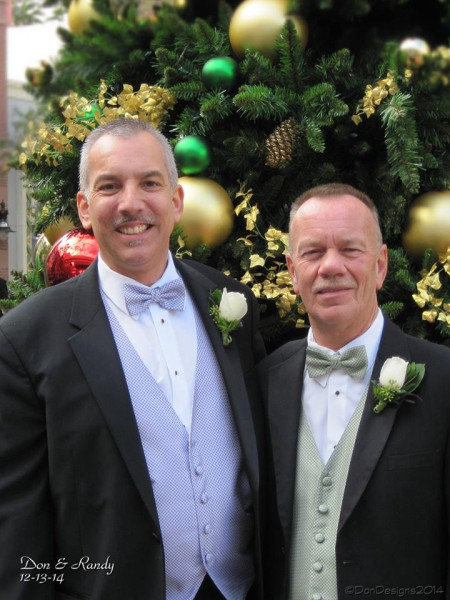 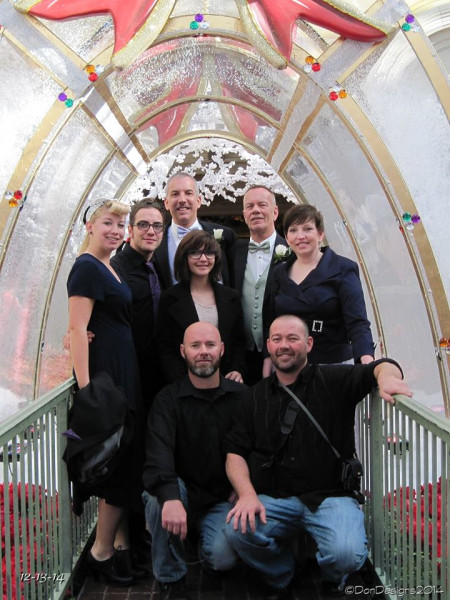 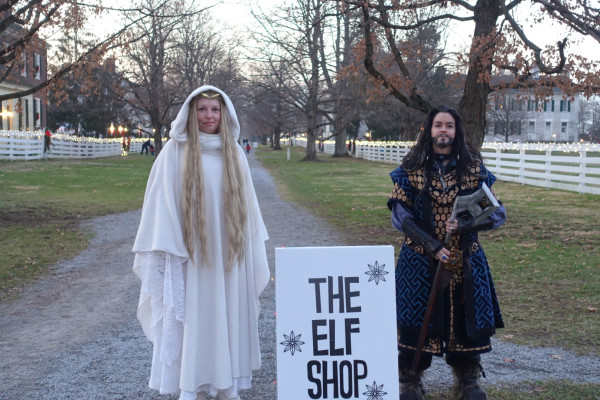 I was still jet-lagged when I went, but the Shire is very relaxing, and I came home refreshed.

After all that, January found me wanting to hibernate, which I mostly did. Now, snow has kept me from several gatherings in February. I am getting a few things done around here. I find myself less adventurous when it snows.

There are some changes coming up at work. My boss put his notice in. He’ll be working four days a week through March and three days a week through June, then he’s retiring. He’s been a great boss. I am apprehensive as to what the future holds, but I will ride the wave and see what happens. I’ve been very lucky in my job, and I hope it holds out.

Costume-wise, I have one project I’ve barely started, but only a few people know about it, and for now, I want to keep it that way. So far, I’ve bought a wig and some patterns to play with. That’s it. I will probably document it here, but keep the posts private until I’m ready to reveal them.

I cleaned out a closet recently and found a couple pairs of Victorian-styled shoes I’d forgotten about. I want to clean them up so I can wear them again. 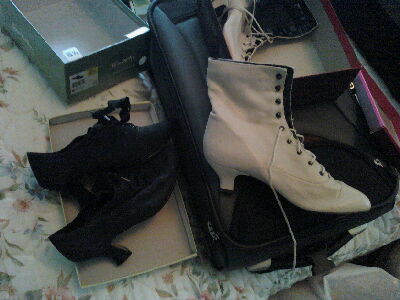 That’s about it. It’s winter and it’s cold, so I shall return to my hibernation.

Post-Ferguson, I'm seeing that everyone has an opinion. My opinion: I think it's time for those of us not directly affected - and doing no more than posting outrage on a keyboard - to move on. Ignore the media. Enjoy your Thanksgiving.

But related to Ferguson, I'm seeing a lot of videos of black men shaming other black men. All well and good, but the people I see posting them are always white.

As a white person, it doesn't feel right to me to be posting a video/blog/essay by a black man that tells other black men how to behave.

First of all, among my online friends, I have but two black men that regularly show up in my friends/news feed. And they don't need the lecture.

Yes, it's a black man talking/writing, but if I repost it, I'm signing off on it, and it seems rather condescending of me as a white person to be lecturing a black man about how to behave. But again, few black men would see it anyway. So who would I be preaching to?

Would I really just be reinforcing the notion that, by virtue of being white, I AM better? Is it just a collective patting of our white selves on the back, as if there is no bad behavior among us?

This kid is so daring! He learned to dance for this video, and he really sells it!

ALS Breakthrough: Cause Is Found

Still have to hem the chiffon overskirts, but it's pretty much finished. I love how the sleeves turned out! 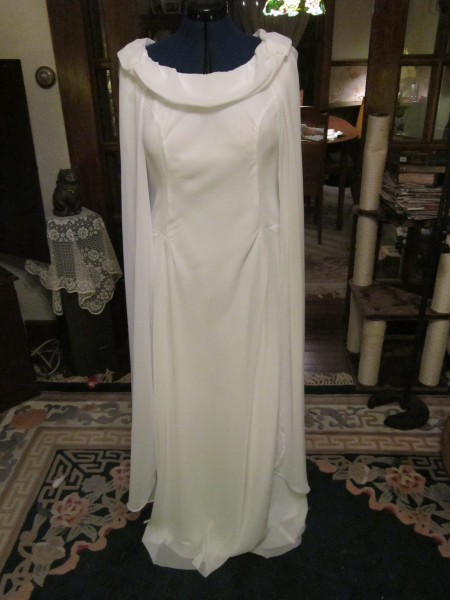 Three day weekend. Guess what I did?

After finishing the neck facing, I put the zipper in and tried it on for the first time. It felt like I was wearing a cloud! 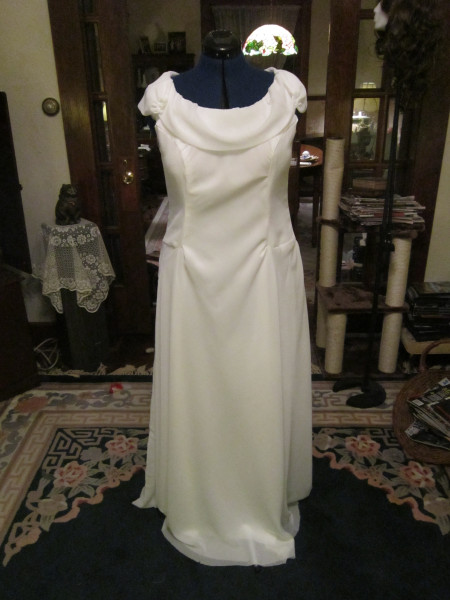 I spent most of Sunday trying to fix issues with puckering, etc., from difficulty with the zipper and my brilliant idea to incorporate part of the bodice into the skirt portion with the chiffon.

Do not try this at home! If I had it to do again, I would have made a separate bodice incorporating the princess seams, and the skirt with six panels in the poly and two in the chiffon. It would have hung better and saved time.

Nevertheless, it is what it is, and after awhile, I quit monkeying with it, because I felt I was doing more harm than good. 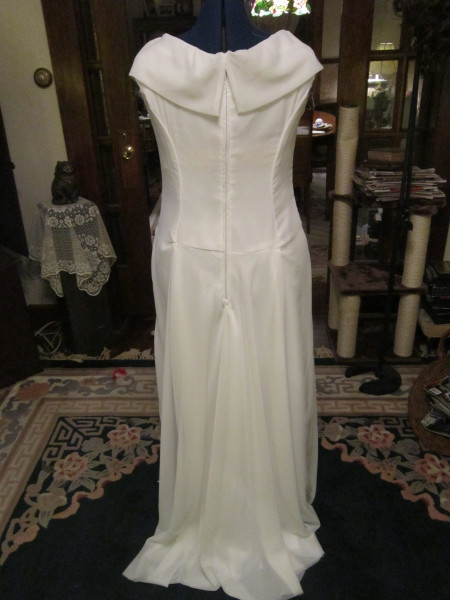 Left to do: the sleeves are ready to sew into the dress, then finishing the collar, then the hems. Three hems, because the skirts are not attached at the waist and fall separately from that point. I should get some great movement as a result.

I did French seams on the sides of the chiffon skirts - my first time doing that. Again, a learning experience, but I did the inside layer first, so the outer one looks super. :) 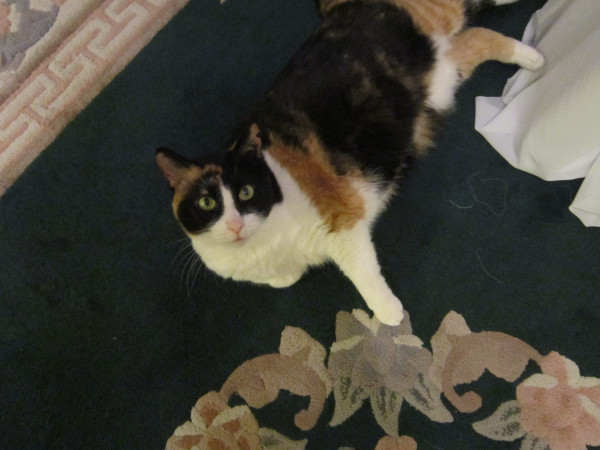 I have enough done to put it on my dress form! :) 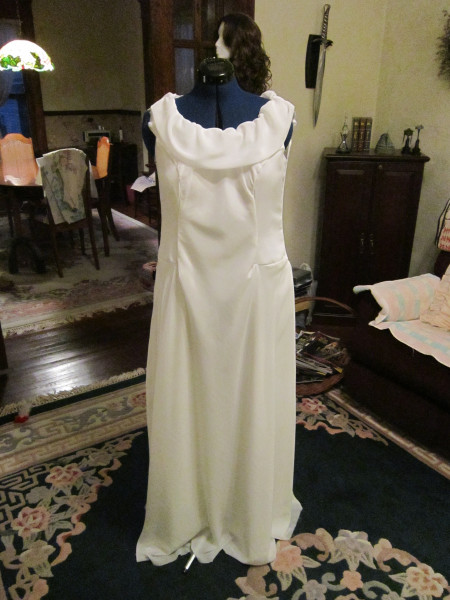